When the Swastika Becomes Complicated 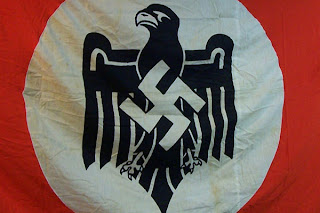 The debate as to whether or not the swastika symbol was an Aryan sign for the bond between Indian and Teutonic (German) civilizations sparked the adoption of the symbol by Hitler and the Nazi Party of Germany. The Nazi Party believed that the symbol was sacred to Aryan culture(29). Although this was not his intent, Dr. Schliemann’s discovery of the swastikas in Homer’s Troy at Hissarlik sparked his interpretation of its uniquely Aryan religious origins. For this reason, Hitler’s Germany used the swastika symbol to represent their anti-Semitic goals(30). Dr. Schliemann’s intentions were not to support the Nazi Party’s goals, as he was not an anti-Semite, but his collaborator Eugene Burnof was a known anti-Semite. Burnof’s writings about the swastika claim that because Jews never adopted the symbol it is, thus, rationalized in anti-Semitic origins.

Despite the negative associations that the swastika symbol has, it is enlightening to highlight the origin of the symbol and to see the pre-historic symbolism that it once possessed. The following link is a fellow thought provoking blog that discusses the swastika ideology in a similar way with an insider perspective. It raises issues as to whether the damage caused to the swastika can be repaired, despite its cruel past;
http://www.tboblogs.com/index.php/entertainment/comments/taking_the_swastika_back/