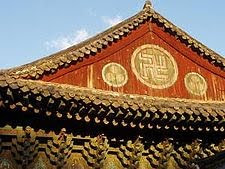 The swastika is an ancient symbol which is highly sacred in Aryan civilization and culture and has been around for thousands of years. Swastika is Sanskrit for ‘it is well’ or ‘so be it’(1). Manji is the term associated with the Buddhist swastika, and is depicted as a ‘whirlwind’, where the four feet symbolize the movement of wind. The Manji consists of a vertical axis and horizontal axis. The vertical is associated with the connection between heaven and earth and the horizontal is associated with the harmonization of yin and yang. The swastika symbol serves as religious ideology, as an occult talisman, meteorology tool and guild emblem(2) and varies greatly in appearance from culture to culture. In Hinduism, the symbol signifies the requirement to pray for success with the guidance of the Almighty. It is also a sign for perfection(3) in the cosmic cyclicality of eternal Cosmic Law (rta). For Hindus the symbol is and remains a symbol for auspiciousness. The hooks on the symbol mark the cyclicality of life and samsara(4). The symbol is most commonly associated with Brahma (the creator), Vishnu (the preserver) and Siva (the destroyer), who together become an icon for celestial life of both humans and animals(5).

The above picture is of the outside of a Buddhist Temple in China, which proudly and prominently displays the swastika.