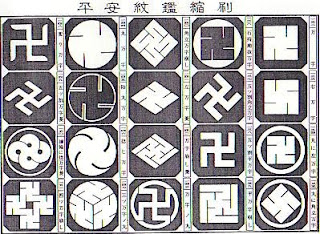 Japan; From the Japanese symbol book, manji (swastika) forms are depicted from the early 20th century. The related picture is of manji, note the variations of the symbol. When the feet of the swastika are pointed left, the symbol represents love and mercy, but when pointed right, it represents strength and intelligence(28).

Gaza, Peria; During the 2nd and 3rd century, the swastika was the cross and symbol for Manichaeism, which was discovered on pottery, church altars and in religious texts.