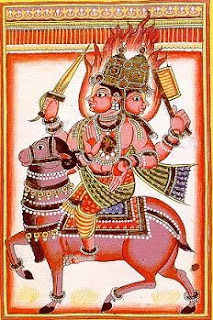 The swastika symbol is also commonly associated with the sun as a meteorological tool and as the monogram of Vishnu and Siva(9). For this reason, scholars often connected this meaning of the swastika to the notion that the Aryans primitively worshipped the sun, despite claiming to be monotheistic(10). Agni is the god of the fire-stick, which is also associated with the swastika, which is believed to represent sacred fire sticks(11). The above image is a depiction of Agni, the Hindu God.
The swastika has a number of related meanings and many variations of the swastika existed by the Late Bronze period. It is believed in several areas to be a symbol for reincarnation and longevity. In Scandinavia, swastikas are the symbol that embodies the god Thor and for Latins it embodied Jupiter, Tonans and Pluvius. The symbol itself is believed to be a representation of the lightning bolt associated with Thor’s Hammer. The symbol has also been linked with the fylfot cross and the Chinese Y(12). The Hebrew letter ‘tau’ also has very similar features as the swastika, which means the sign of life and can also be interpreted to represent fertility(13).

Interpretations such as these seem to have similar ideologies about the symbol. However, in order to discuss the symbols importance further, its origins must be explored so that the swastika and its relation to the Silk Road, and resulting migration can be put into context.