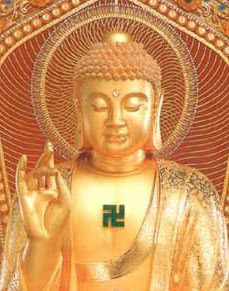 The most common Buddhist interpretation of the swastika is that it is the footprint of Buddha, referred to as the ‘won’, by the Chinese. They believed that when Buddha walked he left behind swastika footprints which are meant to represent dharma. The hooks on the symbol represent the pegs on the wheel of law(6). The swastika is even present in manji, a Japanese symbol book that dates from the early 20th century(7).Another Buddhist interpretation of the symbol refers to a posture that Buddha takes during meditation, where his arms are crossed over his chest and his legs are both crossed over each other, this posture is known as the ‘swastika posture’. In Japan, the swastika symbolizes Buddha’s heart, which is often present on the chest of Buddha in representations of the iconic figure(8).